Working on the MEGA65 IDE

It's been a bit of a while since the last post, and there are some good reasons for that.  Chief among those is that I have been busy temporarily moving to Germany with my family for work.  We are staying just long enough that we have to go through all the formalities as though we were staying forever, but not long enough to be able to settle properly.  The net result is even less time available than normal.  However, on the upside, I am located nearby to most of the other MEGA folks for a few months, which is very nice.

What I have been working on in the meantime in what spare moments I can find, is the beginning of the MEGA65 IDE.  This IDE will integrate with the m65dbg debugger, and will run mostly from within LGB's MEGA65 emulator.  That is, the user interface will in fact be a C65 program.  While this might sound strange, it has the added benefit that we will end up with a (hopefully rather nice) native text editor/viewer for the MEGA65.

I have a large part of the editor working now, including the ability to load multiple files (even if they don't all fit in RAM at the same time), switch between them, and even display multiple files on screen at the same time, as the following screen-shot shows, showing some of the C source code of the editor itself loaded (it is being written using the cc65 6502 C compiler): 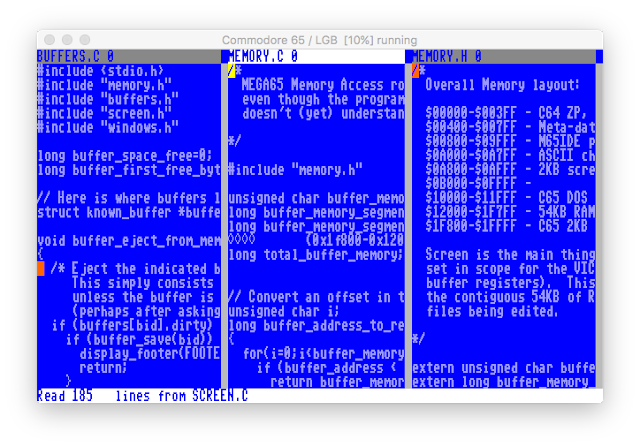 The idea of the split-screen mode is to make it easier for debugging: The current stack-trace could be displayed visually showing the recent call graph.  Also it is handy to be able to look at two files at once when programming.

The editor also natively uses ASCII instead of PETSCII, so that it is easier to work on source files intended for cross-compilers and cross-assemblers (or in the future at some point, cc65 or ca65 running natively on the MEGA65)

Here is a more ordinary looking screen-shot with a single file in view: 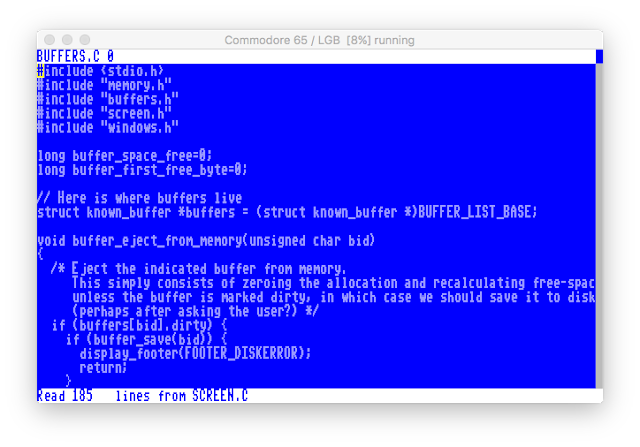 You can see here that we have curly-braces as part of our ASCII-goodness.

The next step is to finish cursor movement functions, and then work on editing functions.  The editor controls are based rather loosely on Emacs and the UNIX shell conventions, e.g., control-A and control-E to jump to start and end of line, respectively.
Posted by Paul Gardner-Stephen at 07:30 14 comments: