The "Chipageddon" parts shortage is weird

As many of you are aware, the MEGA65 has been delayed because of the whole supply chain disruption stuff that we have all come to know with COVID, and not at all helped by Russia deciding to invade its next-door neighbour.

We managed to source all the electronic parts for the first batch of MEGA65 months ago, and thought that we were all in the clear.

Then we found out that the power supplies were delayed for a bit. But not as much as the cardboard for the boxes.

Well, the cardboard turned up at the factory and was busy getting printed, but was delayed for a few more days because of problems getting a truck driver and the wooden palettes on which to stack the printed boxes.

The truck driver thing I knew was an issue already, with Germany going backwards by about 15,000 truck drivers a year, in part because they stopped teaching people to drive trucks in their year of national service, and not many people are willing to fork out around 10,000€ to get their Class-E driver's license, to qualify them for a job that is pretty poorly paid, and has notoriously bad working conditions.  As a result there are about 10,000 less qualified drivers created each year, which amounts to a good 2/3 of the short-fall.

I take a bit of interest in the truck-driver thing, because I have the Australian equivalent of a Class-E license (A "Heavy Combination" license for the curious, which means I can drive semi-trailers, but not b-doubles or road-trains), and am mindful of truck driving as a Career Of Last Resort(tm), which is at least handy to have as a short-term solution should the need ever arise. And the key points there are short-term and last-resort.  It's fun to drive 80 tonnes of truck around for a few days, but to have to do it day-in, day-out, and not see your family for days at a time, all the time, is not hugely appealing to most folks. So why would you invest 10K in getting qualified for such an unappealing job?

But anyway, the truck driver wasn't as much of a problem as the packing palettes are turning out to be. This is because the highly specialised and efficient German palette making machines are designed to use a specific high-grade nail made in ... you guessed, it, Russia. The other options for importing finished palettes for Germany are typically, Russia, Ukraine and Belarus. Oh dear.

Meanwhile, we are also seeing other less obvious supply chain issues.  For example, I needed to order some parts for the prototyping of the next iteration of the hand-held version of the MEGA65, and had to search all over the place to find a supplier with the combined microSD / SIM card holders we are using to save space. I did eventually find a wholesaler in Japan who had them, so that I wouldn't have to wait the 72 week lead time (lead times of up to 100 weeks are now becoming quite common).  The catch was the minimum order quantity (MoQ) was 244, when I only needed 8 pieces.  Fortunately they are less than 0,20€ each, so even multiplied out, this would mean about 50€.

I placed my order, and got an email a few days later saying that the MoQ for this scarce part had increased from 244, up to a complete reel of 1,200.  Needless to say this struck me as rather odd: Because of a parts shortage, I was being forced to buy hundreds times more parts than I needed.  It also happened with some other parts like resistors and capacitors, where we had to order a reel of 2,000, when we only needed 20 or 50 pieces. So even though I only needed this many: 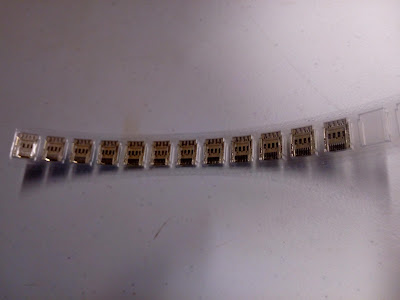 I ended up with this many: 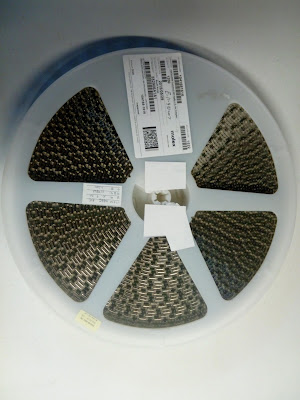 So what is going on here? I think there are a few factors at play: One, the wholesalers are simply too busy to be bothered cutting a few parts of a reel, like they might have done before. Two, they don't want the risk of being stranded with most of a reel. This is especially true for weird parts like the ones I was ordering.  I think there is a good chance that they just wanted to get rid of them, and free up their warehouse space for something that people are more likely to need.

Anyway, back to the MEGA65, we got our palettes, and I believe that the cartons should be arriving at Trenz more or less any day now, and the shipping of the first batch of ~400 units should be starting perhaps as early as the end of this week. Exciting times, despite all of the dysfunction in supply chains at the moment.

Posted by Paul Gardner-Stephen at 17:34 3 comments: