One week later, this is a new revision of the MEGA65 DevKit. The board was lowered to leave more room for cables and programmers which required for a backplanes and side pieces. Now everything fits perfectly even if you wish to keep the FGPA proggers attached forever. This time we also removed the top of the floppy drive for a very geeky look (final DevKits will be a bit more sleek, stay tuned): 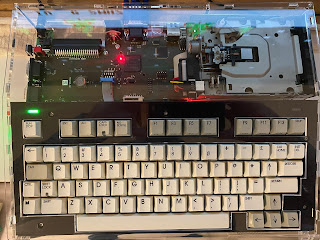 Inside live the MEGA65 PCB r2 from Trenz and the wonderful MEGA65 keyboard from GMK.

Some of you have asked if the DevKit already is working so here is a little video of it playing Sam's Journey:


I have also compiled a little FAQ for possible other questions about the DevKit:

Q: What's a DevKit?
A: It's aimed at developers so they can develop software for the machine or even help shaping the final product before it is released.

Q: Why does it look so different?
A: The case is made in a way it can be produced in small batches without the high costs of injection moulds. Its transparency helps finding out if the smoke stays inside the chips.

Q: I am a collector not a developer.
A: The DevKits have laser-engraved Logos and serial numbers to make them unique. DevKits usually are great collector's items.

Q: I only want to play with it!
A: The DevKit is like a "real" MEGA65 only in a preliminary form. You might encounter hickups but you can always (soft-)update it.

Q: I do not like the floppy.
A: The DevKits come as (hence the name) kits which include a refurbished floppy drive. Feel free to leave that out and donate it to us.

Q: What will it cost?
A: DevKits are always more expensive than mass-produced machines, they also get strong support from the makers. It will most probably cost under EUR 1.000 but more than the final machines.

Q: Can you build it for me?
A: It's really easy to build, usually under an hour, maybe two if you are clumsy. If you do not dare to build it yourself please ask around e.g. in Forum64. There are many nice people there!

Q: When can I buy it?
A: We are working towards summer 2020. However, we strongly rely on help by the community so anything can happen!

Q: I am a blessed developer and want to sacrifice all my time but I do not have any money!
A: Please talk to us about support!

Q: You said summer 2020. This means no final machines in 2020?
A: You do the math. It depends on donations and support of the community. We are only humans and not so many, less than 10 active. We do this in our free time with no interest in profit.

Q: What do you need most besides money?
A: Probably VHDL experts but anyone willing to help is warmly welcome!

Q: If I buy a DevKit, can I transfer PCB and keyboard into a MEGA65 case later? Can I even 3D-print my own MEGA65 case?
A: Probably yes!

Here are a bunch of pictures of a laser cut acrylic MEGA65 developer kit case with PCB R2 and the MEGA65 keyboard inside (plus a floppy drive). As you can see it is more compact than the original MEGA65 case fitting the floppy drive on the side and above the board. The kit was designed and cut by our partner plexi|laser based on a layout by the MEGA65 assembly team. 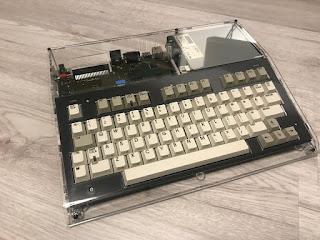 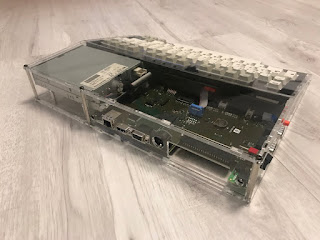 The DevKit is an option for people, especially developers, to get a MEGA65 before it is fully finished and be able to carve the machine together with us and to develop software for it before its release. The top shell is bent to give it a more slick look and to avoid hurting those precious developers hands. 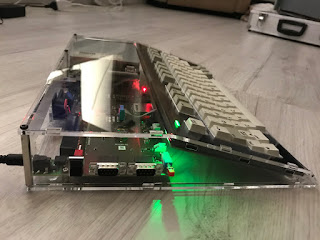 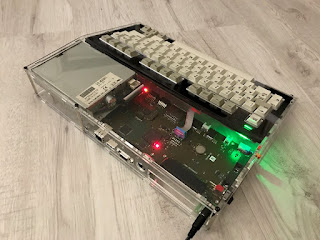 As it is the first version of the DevKit case we found a couple of things that we want to improve, such as better and quicker access to the board for accessing in terms of programming/flashing the board and keyboard as well as access to the SD drive slots. The new revised parts are already in the mail so expect an update soon. 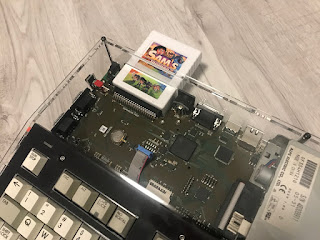 The final version of the case will sport an engraved MEGA65 logo and also a prominent DevKit serial number to make it a great collector‘s item as well. This should shorten the dreadful waiting time for the final machine to be available significantly. Other possibilities to shorten this time can be found on MEGA65.org.