As we get closer to the first 400 units being sent out, we thought you might like to see how our manufacturing partner in Germany, Trenz Electronic GmbH, went about populating the PCBs of the MEGA65.

Trenz designed the MEGA65's PCB and are uniquely placed to do the manufacturing and assembly -- and as with the rest of the key parts of the MEGA65 PCB, these are all manufactured in the German-speaking parts of Europe. The keyboards are also made in Germany by GMK, and the cases in Austria by Hintsteiner. As an example of this partnership, you can read about it on Hintsteiner's blog (in German, sorry, but Google Translate is pretty good these days).

It's worth stressing just how fantastic it is to work with these companies. They all place quality is an extremely high priority, and really take pride in their work. Their close proximity to the core MEGA65 team in Germany is also very helpful, and the lack of any language or cultural barrier also just makes work quicker, easier and more precise. Without their generous support, the MEGA65 would not be where it is today -- which is of course not very far off from being shipped out (more on that in a bit)!

In fact, it has turned out to be critical to the project that we have taken this quality-first approach, because this pesky pandemic has made it very hard for small projects to get the attention of the low-cost Chinese manufacturers, and even to get the components required to build boards.  We really feel for some of the other retro computing projects out there at the moment that are struggling to get the FPGAs and even components like resistors that are in very short supply right now.

But back to the PCB, the MEGA65's mainboard is a multilayer PCB with the big fat FPGA at the heart of the machine.  Just designing a board that can fan out many hundreds of pins from a chip to the various places on the board that they are required is non-trivial. Then to manufacture, you have to be able to place the solder paste for the reflow precisely, and then place the components in their correct locations using a pick-and-place machine, often called a "chicken-picker" for the way that they alternately "peck" at the component rolls and mainboard. Here you can see the head over the mainboard: 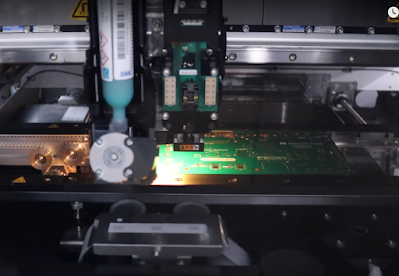 These chicken-picker machines are quite large and expensive machines, especially the ones that are able to place hundreds or thousands of components per hour. The parts themselves come from tape reels, which automatically rotate as each component is taken, allowing the whole process to be driven automatically. You can see the reels on the left of the machine here, as the shuttle moves to collect the components there, before moving back to the right where the board is hidden behind the structure from this angle:

The chicken-picker machines also typically have a camera that helps them to visually check that the "chicken head" is in the absolute correct location, and that everything is going right, which you can see here dwelling on some components near the MEGA65 logo on the board:

You can see all of this in action in the following video that we have made with Trenz to show how the PCBs get processed in the chicken-picker:

Otherwise, behind the scenes we continue to work on a bunch of improvements to the MEGA65 core, including among others, improving our already pretty-good SID to sound even better, improving international character input with the keyboard, lots of other little improvements of various kinds, continuing to improve the BASIC65 ROM and KERNAL to support nice things like direct access to the SD card, D64 disk image mounting, fixing 40 year old bugs in Commodore's DOS among others. To join the fun in real-time, maybe join our discord server.