While writing a program with a student, we wanted to make an efficient dynamic jump table under C64 BASIC 2, where could have an array of line numbers that represent event handlers for particular events.  The idea is that we would then GOSUB JT%(EVENT) to dispatch to the appropriate handler, and be able to freely update the jump table as we go.

However, C64 BASIC doesn't allow this.  I am not really sure why they made the GOTO command (which is the heart of GOSUB also) unable to resolve variables. It would have meant that the ON ... GOTO command could have been left out, saving ROM space, for example.

Anyway, a bit of poking around found that other people have tried to do this, but none of their solutions really seemed particularly nice.

So, I thought, is it possible to do this just using BASIC 2, and without any assembly routines?

The answer is YES! Using the rather under utilised technique of self modifying BASIC programs.  Is this a horror beyond comprehension?  Probably.  But it also works a treat :)

So, here is how it works:

1. Have a GOSUB command somewhere in your basic program that you can reliably find in memory. I made it GOSUB,21456 in my program.  The number doesn't matter, provided it is 5 digits long, so that we have space to overwrite with any valid line number we might encounter.  The comma is there because GOSUB+COMMA = SYNTAX ERROR, and thus should not exist in any sensible program*.

2. Find out where in memory that line lives, but searching for the GOSUB token (141) and the comma:


(By doing the comparison in the negative sense, the loop continues until it finds the location, and then aborts as soon as it finds it).

3. To GOSUB to any line, have a routine like this:

(The astute reader will realise that they can merge steps 1 and 3 to give something like:

Here is a complete program, and an example of it running. It is short enough to fit on a single screen, even with some comments! 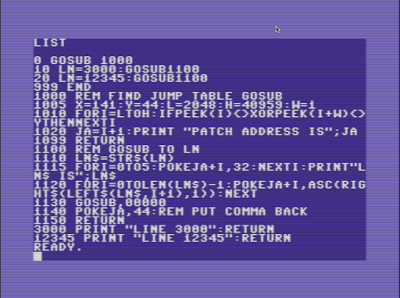 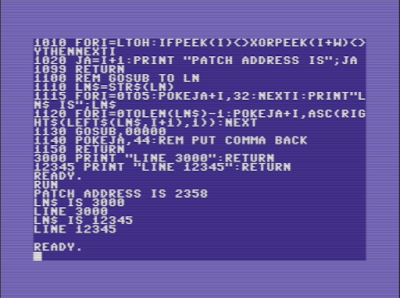 * I don't claim that this program is sensible. It is also possible for it to show up in a string that has shift-M followed by a comma, but I can avoid that easily enough.
Posted by Paul Gardner-Stephen at 12:03 12 comments:

It's been a while since I have tried to improve the CPU performance of the MEGA65, so I thought I would take a look at an optimisation I hadn't tackled yet: Accelerating infinite loops.  This sort of loop isn't normally accelerated because they occur so rarely in programs on modern computers.

However, on 8-bit systems it wasn't uncommon to have an infinite loop occupy the CPU, and the rest of the work occurring in interrupt routines.  This means that there is a surprising amount of CPU time wasted infinite loops that we can try to reduce.  We can get an idea of just how much potential benefit we can obtain by applying Amdahl's Law.

Basically if 1/10th of the CPU time is spend on a particular task, this means that even if that task can be made to take no time at all, that we can only reduce the run time to 100% - 1/10, i.e., it will still take 90% of the original time.  This is where accelerating infinite loops has such great potential:  If the task would have taken infinite time, and we can reduce that to finite time, then we have gained a massive advantage.  Even better, if we can reduce the infinite time to practically zero, then we can gain an infinite speed up.  That is because, if we speed up the infinite part to take practically zero time, we have speed up the overwhelming majority of the task.  For any finite remaining run time, the ratio of speed up will be infinity / remaining run time, and since infinity divided by a finite quantity still equals infinity, the result is infinite speed up.

This all sounds great, but how can we go about achieving this in practice?  For a start, there are all sorts of infinite loops that we can have to contend with.  Again, a fortunate situation is that on 6502 systems the vast majority of infinite loops take the simple form of a JMP instruction that jumps to itself, such as:

The first trick is how to efficiently detect these operations. Fortunately this is simple: If the same JMP instruction is encountered two instructions in a row, it means that the code path has become invariant, and an infinite loop will eventuate. In fact, this method is robust enough that it can be used to detect a surprisingly wide range of infinite loops. The second trick is to know how to achieve the effect of the infinite loop. Fortunately JMP instructions don't perform any other computation, or cause unpredictable changes to the processor flags, so we can, in fact, simply ignore the instruction on the second iteration, falling through to the next instruction in memory -- thus effectively executing an infinite loop in a about 12 clock cycles, i.e., 12 x 20ns = 240ns.  That is, we can execute an infinite loop in about 1/4 of a single CPU cycle on the C64, or slightly faster than a single CPU cycle on a C65.  While there is scope to further improve on this, it will be good enough for now.

So, first step is to modify the CPU to detect back-to-back jumps to the same address, and to abort the jump when this occurs.  This turned out to be trivial. Here is the complete patch:

A quick test using GHDL to verify that it works under simulation was the next item on the list.  For this, I added an infinite loop at the reset entry for the MEGA65 Kickstart. This would have normally caused the MEGA65 to take an infinite amount of time to proceed with the boot process.  But now, we see the following simulation output:


I have highlighted the important lines above. As we can see, the infinite loop is entered at 5,610ns, and is detected at 5,810ns, and the following instruction is executed at 5,890ns.  Thus the total cost of the "infinite" loop was a mere 280ns -- a little slower than I predicted, but still quite acceptable.  It will certainly do for now, until I have time to track down where the other 40ns has gone.
Posted by Paul Gardner-Stephen at 20:43 2 comments: