It is almost a week since I fixed some underlying faults in the hardware support for drawing proportional fonts, together with some bugs in my font file generator that was trimming the right-most pixels from some glyphs.

However, it is only tonight that I have managed to get the display working, because the character generator logic in the VIC-IV would seize up when trying to display variable-width full-colour characters. I eventually tracked the bug down to the paint_ready flag never being cleared if the VIC-IV was asked to draw a one-pixel wide 256-colour character.

This came about because the logic previously assumed that there would always be a 2nd-to-last pixel in a character, which is clearly not true when a character is trimmed to be just a single pixel wide.

Now that I have that fixed, I can finally draw variable-width anti-aliased* fonts.  The following two screen shots are of the same Unicode string being rendered using 10 point and 20 point versions of the same font. You can get an idea of the size of characters from the grid of junk at the bottom of each.

Again, the matrix-like tint is due to the colour-cube approximation of the VNC viewer I used to capture the image.  The characters look pure white on the VGA display.

Obviously the 20 point version (top) looks nicer than the 10 point version.  That said, to my wooden eye, they both look pretty decent.  The kerning looks acceptable, and both ascenders and descenders on characters are drawing fine.

I haven't optimised the unicode printing routine code at all yet, so it is still fairly slow to draw. Nonetheless, I can draw those several words in well under a frame, as can be seen in the following screenshot where I set the border to white while the drawing happens: 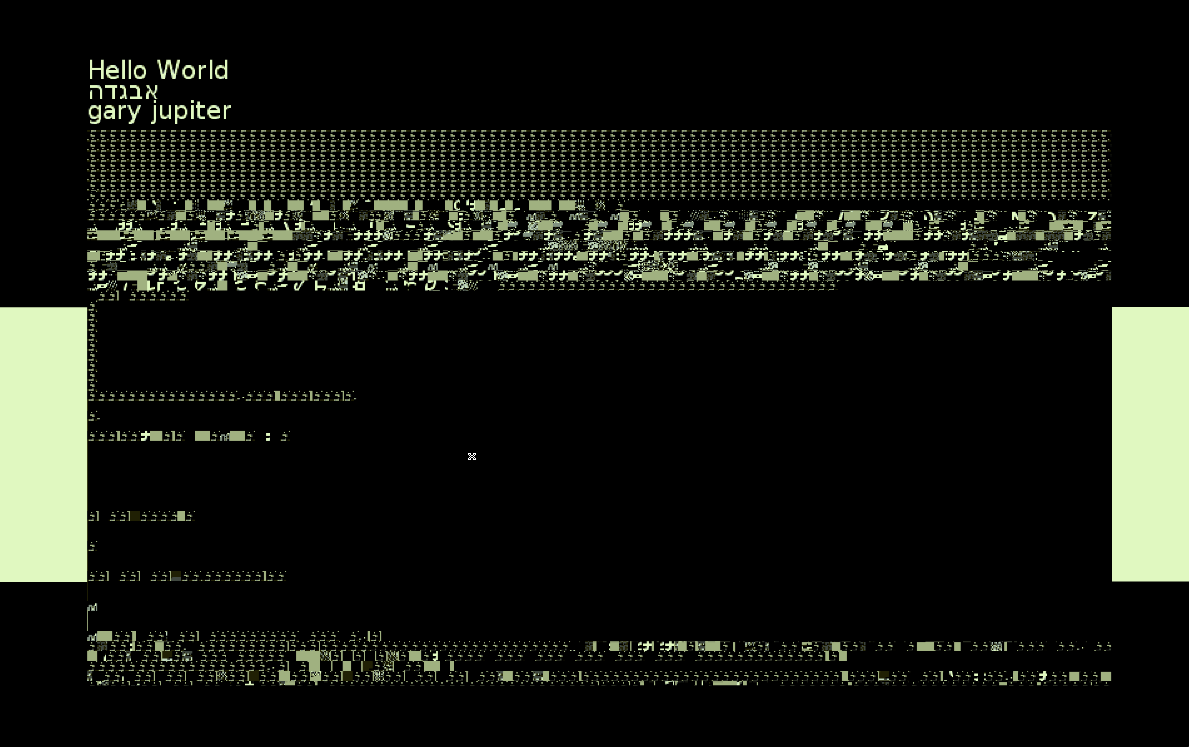 Earlier I said that I can now draw anti-aliased characters.  This is currently true only if I want to consume the entire 256-colour palette on fake alpha-values.  As discussed in earlier posts, I am part-way through implementing a real alpha-blender that will allow each character to be a different colour, and appear on a different background.

I also need to get around to implementing variable height characters, so that there are no large blank regions between lines when the upper rows of pixels in the top-most row of characters of a font are unused.

The other thing I hope to work on soon is to update the little programme I wrote to display the unicode text so that it can access fonts located outside of the first 64KB of RAM.  This will use the new 32-bit indirect zero-page addressing modes.  Then I will be able to display text from different fonts on the same display.


Posted by Paul Gardner-Stephen at 22:08