A long time ago I wrote about implementing a proportional text renderer for the MEGA65, that uses the crazy enhanced text modes of the MEGA65 to make it much more memory efficient, and also bucket loads faster.

Well, after a long pause, we have a great intern who is working on this with me, with the goal of making a functional simple presentation program for the MEGA65, i.e., something a bit like a very simple version of Powerpoint(tm). Only about a million times smaller ;)

So after a lot of preliminary work, we have something that visibly works: 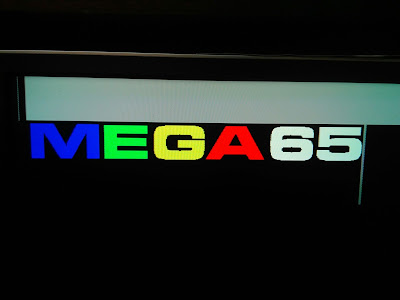 As you can see, we already have colours working.  These are selected in the editor, just like on the C64: Control+number.  I also made a little video showing how fast it is (but couldn't play with the colours while holding the camera in my other hand):

That's an 80 point anti-alised proportional text display! And it is fast. Even though we are using CC65 for everything at the moment, rather than hand-tuned assembly language.  I know the CC65 is producing some quite horrible code in there, and that there is thus plenty of room for optimisation.  But for now, let's just pull apart a bit of how this all works.

First, we take a TrueType (TTF) font file, and feed it through a special rasteriser that I wrote. That rasteriser produces C64-style 8x8 tiles of pixels, and a map of how to make each glyph in the font from those tiles.  The tiles can in principle be either monochrome or 8-bit pixels.  For now, we actually only support the 8-bit pixels.

This works with the MEGA65's alpha channel mode and full-colour text mode where one byte is used for each pixel in the characters, thus requiring 64 bytes per character tile, instead of the usual 8.  With the alpha bit set on the characters, the pixel values are used to mix foreground and background colours for nice anti-aliased rendering. This also means you can end up with way more than 256 colours on the screen, because the alpha-blended colours don't eat precious palette entries.

Anyway, our crazy little program takes one or more of these rasterised fonts, and lets you render Unicode strings, and edit them.  At the moment we only support 16-bit Unicode points, so no smiling poo emoji for now.  That said, the engine does support colour glyphs, so it would be quite easy to support coloured emoji, just by having the alpha flag for those glyphs cleared.  The only change we would need to make is to have a per-glyph alpha flag, instead of having it per-typeface as at present.

The next steps are to make the editor more robust, and support loading multiple fonts at the same time. It already supports multiple colours, and multiple typefaces is really just an issue of us adding the code to load the fonts in from the SD card.
Posted by Paul Gardner-Stephen at 22:51