Another exciting moment this week: We have the samples of the Revision 3 PCBs for the MEGA!  Pretty pictures follow, along with some discussion along the way.

First up, we can see that the PCB is quite similar to the Revision 2.  In fact, it has as few changes as we could get away with, while fixing various niggly little problems: 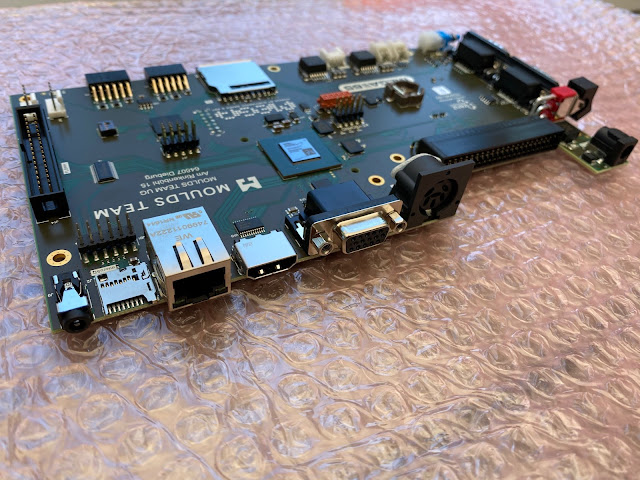 This view more from above shows that we have much nicer silk-screen artwork, clearly labeling it as a MEGA65, recognising Trenz, MEGA, and the MOULDS TEAM, the tiny entity we had to setup to handle the moulds funding stuff:
We'll cover some of these things a bit more in some of the photos coming up, but we can see here that there is an extra 2-pin connector on the right hand-side, so we can now support stereo internal speakers, complete with 2W amplifier, so you don't need to worry about having a monitor with speakers if you want to kit your MEGA65 out for easy party use: 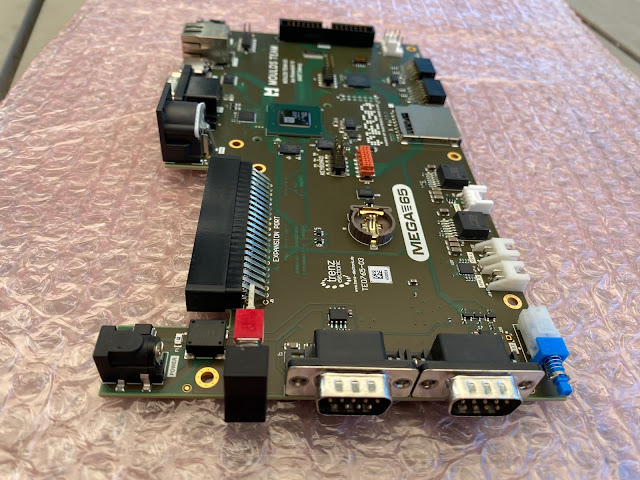 A bit closer view of some of the connectors.  The keen-eyed will notice some changes to the digital video output area: We have changed from the ADV7511 display driver to directly driving the digital video from the FPGA, to solve problems we had with sound on the ADV7511.  The 3.5mm audio jack also has the pinout corrected, and works for stereo output straight up now: 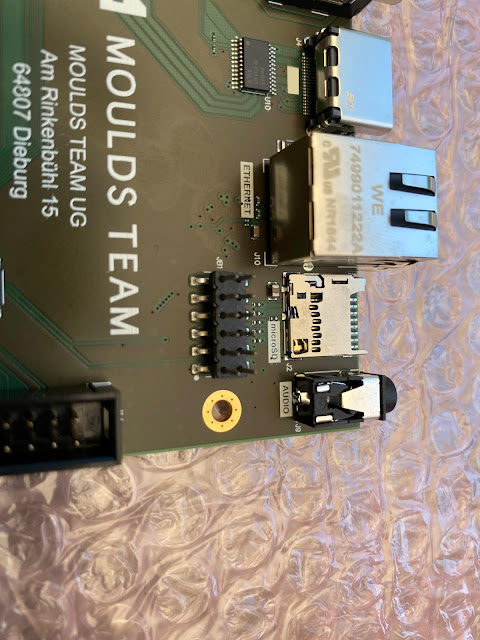 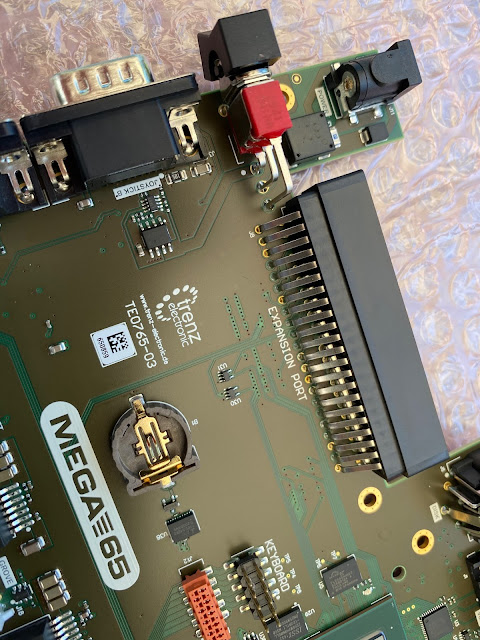 And perhaps the biggest change, in terms of long-term effect, is that we now have an A200T FPGA instead of the A100T.  This means about 2x the logic capacity and almost 3x the internal RAM (BRAM) in the FPGA. This means we can support other more complex machines more effectively.  AGA Amigas should be absolutely no problem for example. 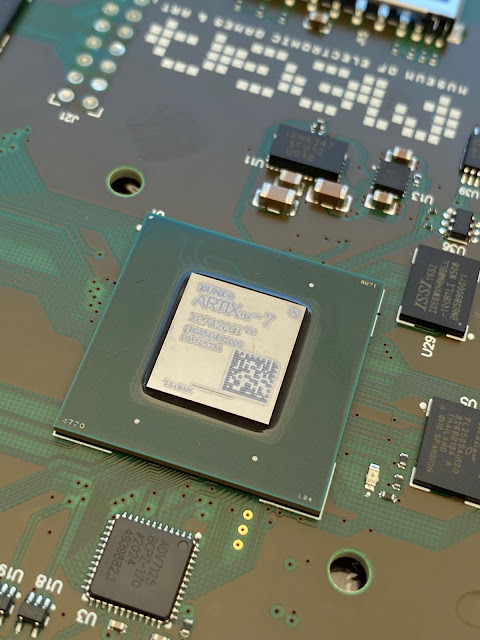 From the back, the main difference to see is all the nice pull-up resistors for the expansion port: 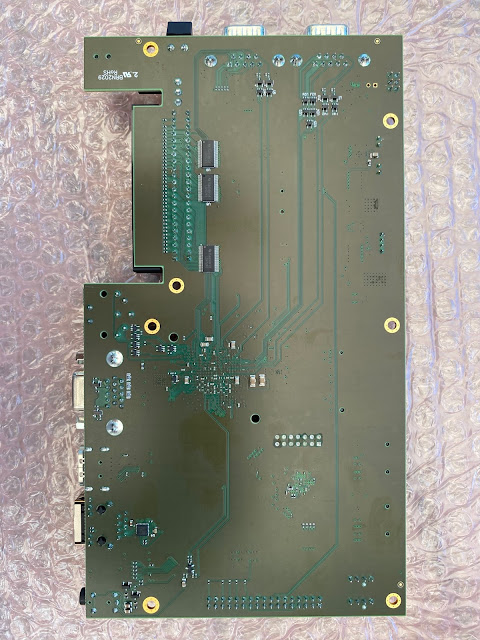 Back to the front, from top left going anti-clockwise, we have the internal SD card, PMOD expansion connectors, dual floppy power connectors, and the 34-pin floppy connector.  The floppy connector now has all the signals to support two drives connected at the same time: 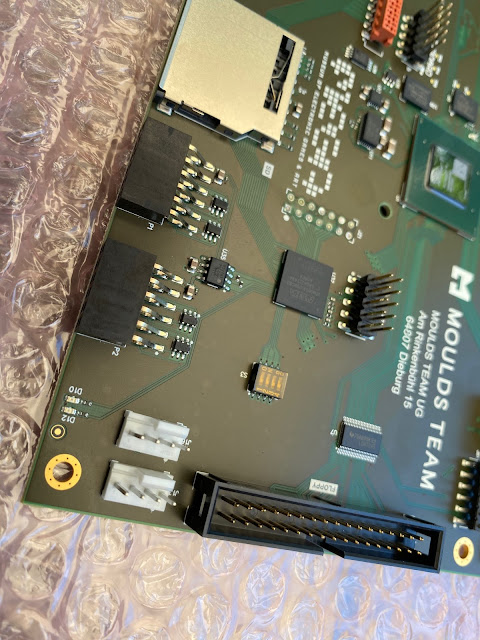 Here we have the nice MEGA logo, and the keyboard connector above it.  The red connector and normal header are both connected together. This just gives us some freedom as to which style cable we use.  The keyboard header can also in principle host some simple expansions, as it has lines direct to the Xilinx FPGA.  Speaking of FPGAs, we also see the MAX10 service FPGA.  This FPGA does some power house-keeping, and also gives us the eventual posibility of making the main FPGA boot from a bitstream stored on the SD card, so that you aren't limited to what can fit in the 32MB flash that the Xilinx normally boots from. We also see the unpopulated JP21, which has 12 lines directly connected to the MAX10 FPGA, and can be used for internal expansions as well.  We're in the process of making a mechanism to remotely access that header from the Xilinx FPGA: 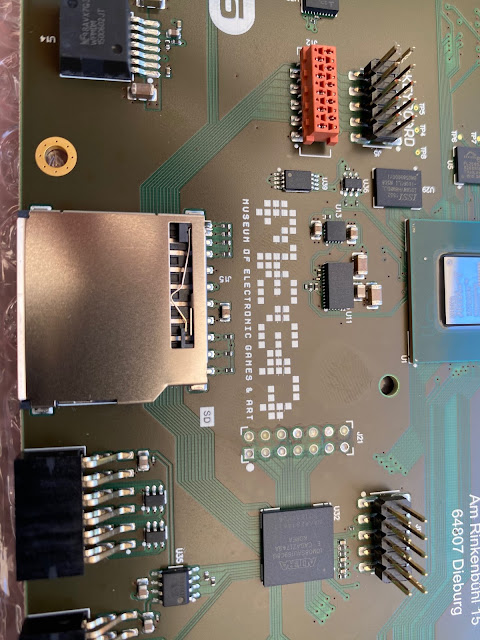 Here we have the monster A200T FPGA again: 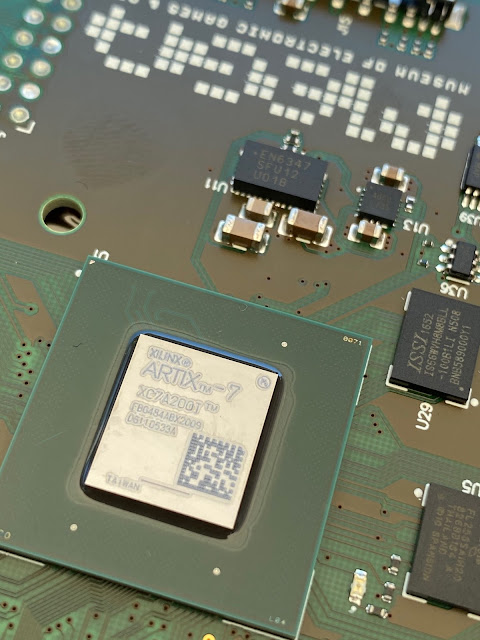 As previously mentioned, we have the extra speaker connector to support stereo internal speakers. There are screw bosses in the injection moulded cases to accept some really nice 2W 31mm diameter speakers we found for using the in MEGAphone. We won't be supplying these in the MEGA65, but you have the connectors there to add some nice loud internal speakers: 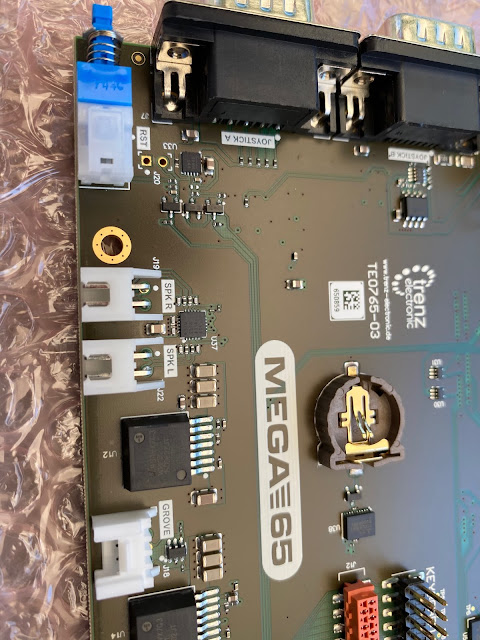 Finally, we have the overall top view, before I sign out and start working in earnest getting the board fully tested, so that we can commit to manufacture for the DevKits! 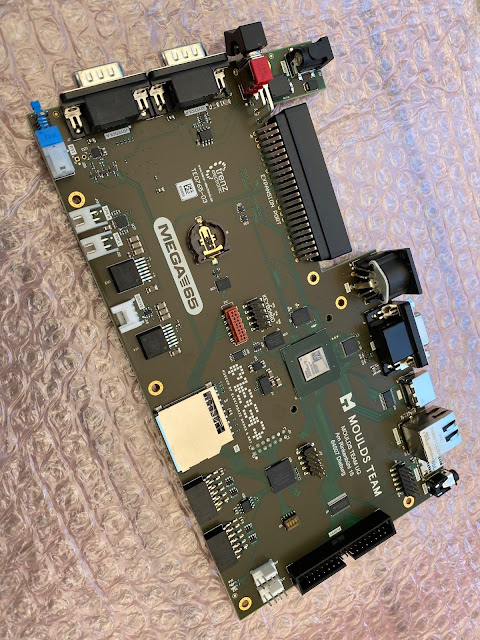 Posted by Paul Gardner-Stephen at 22:22