Just a quick post with some eye-candy of the growing number of fully assembled MEGA65 pre-series machines: 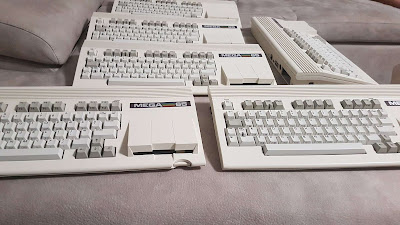 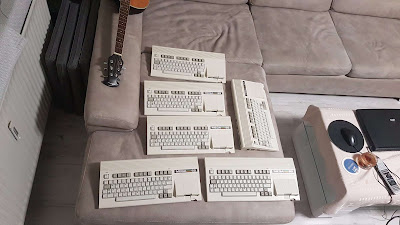 So much 8-bit fun in so little space!

Meanwhile, we continue to work to assemble the rest, and to figure out a good solution for financing the creation of the injection moulds for the cases for mass-production (the pre-series machines were produced using a very expensive per unit vacuum form process, that is much too expensive for mass production).

This is really the biggest remaining barrier. While we have some ideas we are exploring, now would be a great time for any wealthy sheiks in the audience to offer us their patronage ;) Or people willing to run sausage sizzles at their local home improvement stores, or whatever. We estimate the total cost of this stage to be around 65,000 €.  We'd naturally be happy to talk about appropriate ways to recognise any such support.

Of course this is the frustrating part where we need actual money, rather than being able to use volunteer labour. If I tried to calculate the value of the volunteer labour, I'd have to guess somewhere between 500K and 1M €, if we had to pay folks to have done the work.  This really is a labour of love on the part of many -- and from which we all benefit, since if we had to fund this project "properly" from the start, then (a) it probably wouldn't have happened; and (b) if it had happened, it would have had to have cut so many corners that it wouldn't be recognised. It is only through the voluntary efforts of so many that we have managed to re-create this lost unicorn of computers.

We really want to get this last hurdle settled before we move forward, because how we fund this is really the greatest uncertainty left in the process of determining what is a possible price, and thus to start moving towards being able to offer a pre-order mechanism for everyone who is longing to hold their very own MEGA65 in their hands.


Posted by Paul Gardner-Stephen at 15:58