Assembing the next few Pre-Series Machines

Keen MEGA65 watchers will know that the first two pre-series machines have already been assembled and are with me here in Australia. 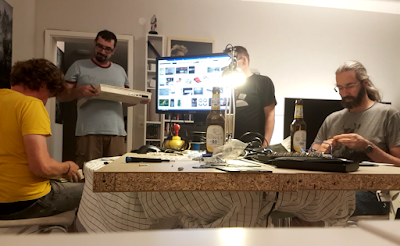 However, all has not been quiet on the western front, with a couple of assembly nights, first to fit the missing pull-up resistors (this was while I was in Germany for the CCC Camp), and then again this week, to begin assembling several machines.  There will be similar gatherings each week until the remaining units have been assembled and our little packets of 8-bit perfection is ready to face the world.

We thought you might like to see a time-lapse of these first two evenings.  For the first one, we didn't have a proper camera handy, so we just put a phone on a convenient light-fitting, hence the slightly funny view from above.  You can also see my legs as I try to get some much needed sleep while waiting for FPGA synthesis to complete ;)


Then this week, the guys got together (sadly in my absence, as I am now back in Australia) and completed the assembly of the next four machines:


Posted by Paul Gardner-Stephen at 20:30