After a pile more work, and just a little more hair-pulling, we now have timing-closure on the video modes, and by and large, they are working as expected, although there are a few remaining things to fix, such as some of the composited overlay displays that are used in particular circumstances.  But those should be fairly fixable without great difficulty.  (There is still a niggling problem that the CPU is not making timing closure, but that will have to wait for another day to fix. I might have to just drop the CPU speed to 40MHz, if we can't use the faster grades of the FPGA part we are using, but I hope we can instead just improve the timing to get closure at the current 50MHz.)

The Xilinx FIFO was doing really weird things for us (most likely because we weren't driving it properly, but I am still not sure), so in the end we ditched it, and implemented our own little pixel FIFO to cross from the 100MHz VIC-IV clock to the 30 or 40MHz VGA/HDMI pixel clock.  That worked quite well, and only took a day or so to mostly shake down.

In the process, and since I was doing a bunch of synthesis runs, I figured I would track down the remaining bugs with the alpha-blending logic in the VIC-IV.  Basically you can make full-colour characters either be 256 colours, or instead, turn on the alpha blender, and get 256 graduations between the background colour and the character colour.

This will be handy for a bunch of uses, but for now, we are focusing on our simple presentation software for the MEGA65, because we would love to introduce the MEGA65 at gatherings using the MEGA65 itself.

We have an intern who is doing great work on that presentation software, and has a mostly functional editor that supports simultaneous use of multiple type faces, as well as colours, underline, reverse and blink attributes (all using the VIC-III extended character attributes).

Having this editor mostly working made it really easy to do some tests that the alpha blender was working properly, and that the video output was stable with the timing closure work, as you can see here: 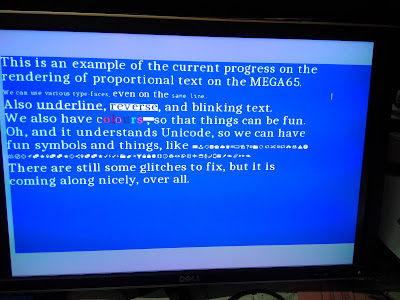 That screen full of stuff was basically just typed in by me in the space of a minute or two, using short-cut keys to change colours (using the normal control and Commodore key combinations), as well as to set the attributes (RVS ON / Control-R, Control-U and Control-B).  Remember that this is all being rendered using gymnastics in text mode, not using a bitmap mode.  Each big character is drawn using a number of normal 8x8 characters with alpha-blending and full-colour mode enabled.  Kerning is via the kerning extended attribute of the VIC-IV.

While there are still a few glitches and bugs to be worked through, the result is clearly pretty nice, and quite amazing for a little 8-bit computer.   Here is a closer view of part of the display, where you can clearly see how the alpha blender is being used to anti-alias the text: 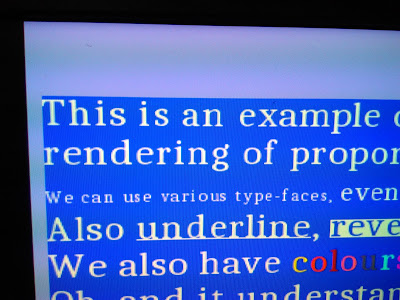 And even closer in, this can be seen even more clearly.  Note that the shadowing on the red "l" is an artifact of my camera, and that it is in fact properly blended. 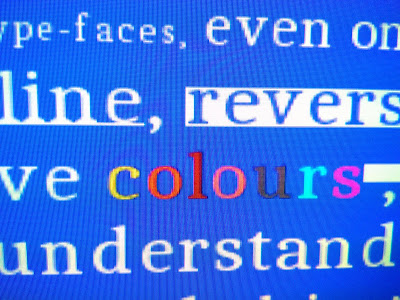 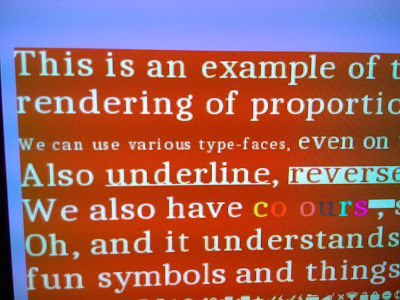 One of the interesting effects of this, is that it is possible to have many more than 256 colours on the screen at once, because each text cell can be showing a variety of colours between the foreground and background colours.

And just to confirm that we really can reproduce annoying 1990s style blinking text using the VIC-III's hardware blink attribute:


So, while there are still a few loose ends to tidy up, I am happy that we are moving forward, and I can cross a couple of long-standing issues off my list.
Posted by Paul Gardner-Stephen at 09:55