The logic for what feature or bug we work on next on the MEGA65 varies quite a lot.  Today, the motivation was my kids have discovered the joy of Wizball, and in particular, playing it as a two-player cooperative team.  The trouble is that the MEGA65 didn't support vertical border knockout in a way that was compatible with existing C64 software.

It turns out to be a real pain playing Wizball without vertical border knockout working, because you can see neither the power up section at the top, nor the colour buckets at the bottom.  I don't think I had realised until today that those were all fully placed in the vertical borders, but they are.

After a quick synthesis run, this was the result (with the border colour changed to blue to make it easier to see what is going on): 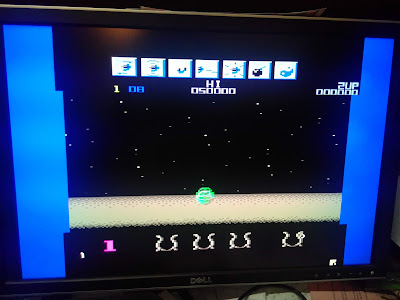 Yay! We can now see the missing sections of the screen.

There is however some detritis in the lower border, which I need to deal with.  This is not entirely simple, because it is actually the 26th and further rows of the screen being drawn, because the VIC-IV isn't limited to 25 rows like the VIC-II or VIC-III.  I'll have to have a think about how I deal with that.   While there is little software for the MEGA65 at the moment, it might just be easiest to have a register that sets the number of lines of text to draw, and just have it default to the usual 25.

Posted by Paul Gardner-Stephen at 20:26