DIY USB JTAG and UART connection for the MEGA65

The best way to connect to a MEGA65 from a PC, is using the TE0790-03 FPGA JTAG Adapter from Trenz Electronic. There are several reasons for this:

1. They are the adaptor that the MEGA65 was designed for.

2. They are really fast. You can flash a bitstream onto the MEGA65 in just a few seconds.

3. The one USB connection does both UART and JTAG, so you have less "cable salad".

However, with the COVID19 "Chipageddon" silicon supply problems, they aren't always available.  So we had a think about how to let people connect a USB UART or JTAG adaptor without the TE0790.

We already have one solution to this, where you can use a TEI0004 from Trenz Electronic with the MEGA65's m65 and m65connect tools, by connecting it via a special adapter board that I designed. Those adaptor boards are available to buy, but the TEI0004 is also affected by Chipaggedon, and isn't always available. So we need yet another solution.

Together with some folks on the MEGA65 discord server today, I worked out that a clone of an Altera USB Blaster JTAG adapter can be used with our adaptor board, to connect to the MEGA65 and control it via JTAG.  With the openFPGAloader program it is possible to push a bitstream to the MEGA65, by connecting it up like this: 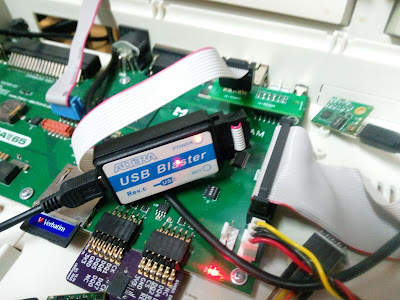 The astute will notice that we are using an Altera cable to flash a Xilinx FPGA -- thanks to the wonder that is vendor-agnostic open-source software development!

So that gets us half of the solution using just a cheap USB blaster clone like these, that can be purchased for less than AU$5.

What that solution is missing, though, is a USB UART, and the means to connect it.  There are few different options here.  I'm leaning towards a PL2303TA-based USB UART like these, because they are dirt cheap (less than AU$2), and should do all that we need, and already come with a USB cable, so that you don't need to make an extension lead between the MEGA65 and PC. I've ordered one from local supply here in Australia, and even with courier delivery to speed it up, it was still less than AU$15, all inclusive.

All that's left is to modify the adaptor design to have a break-out header that the UART pins can be connected to.  Then it will be possible to assemble this whole solution from a hand-ful of low-cost components.  So time to open my KiCad PCB design for this board again, and add the connector.

I'm tempted to do this by just adding a 2nd 10-pin connector, since I already have the male headers for those, and it gives maximum flexibility and least effort on my part as well. Or I might get excited and make the header compatible with one of the common FTDI pinouts, so that people can use one of those, if they have one laying around.  Unfortunately there are about 4 such pin-outs to choose from. So if I do that, it will be based on whichever model I have lurking on my bench here.

In the end, I decided to just add a 3-pin header with GND, TX and RX pins. I will mount this on the underside of the PCB, so that it doesn't interfere with the J2 connector when occupied.

Here is the revised schematic and PCB layout:

It's still all super-simple.  I've submitted an order to PCBWay.com for 50 (the postage is still more than the PCBs for 50 units, because the board is so small).

So now its waiting a week or so for the PCBs and the USB UART to turn up, before I can do the next step.

It's now a week later, and the PCBs have arrived, and I have assembled a couple to test with: 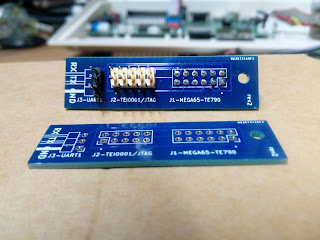 The white wire on the PL2303 USB UART adapter goes to RX, and the green wire to TX, and black to GND, like below. Red doesn't connect to anything. But note that if you are using a different model of USB adapter, they will likely have a different pin out. Research and check it before connecting, so that you don't accidentally kill your MEGA65 by feeding 5V or worse down the JTAG header. 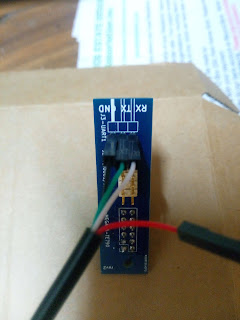 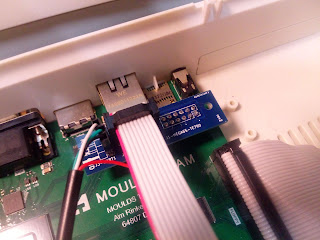 At first I couldn't get the UART working, but it turns out that some USB Blaster cables clamp the pins that the UART is connected to. The solution to that problem is to snip the two pins on the header where the USB blaster or TEI0004 connects, so that they don't connect into the USB blaster: 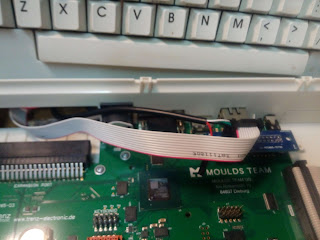 With that done, you can safely plug both a USB UART and the USB blaster in at the same time.

The m65 command doesn't yet know to push bitstreams over JTAG using the USB blaster cables, so for now you have to use openFPGAloader to do that, as described above.  However m65 can happily talk to the USB serial cable, but you do have to provide the name of the port, as m65's auto-detection doesn't yet support detecting these cables. So for example, if you wanted to switch to C64 mode, you would use something like:

We will likely fix both these things in m65, so that it has transparent support for the adapter. The same goes for m65connect.

So now we have a nice cheap solution to get serial monitor interface and JTAG pushing of bitstreams, that is still available even when the TE0725-03's aren't in stock with Trenz Electronics.  The TE0790 is still a nicer solution, as it is just one USB cable, has faster JTAG, and is supported by Vivado and other toolchains, but it's nice to have the fall-back.

Posted by Paul Gardner-Stephen at 19:53