I still would like to formate a fresh 3.5" floppy to test in the MEGA65. However, my 1581 has gone senile, apparently because the 8KB SRAM in it has gone faulty.  The trouble is, the Fujitsu 8264A SRAM is not the easiest thing to lay ones hands on.  However, I have a stash of old ICs given to me by a second cousin a long time ago.  Many of those ICs go back to the late 70s and early 80s.  So I wondered if, per chance, I happened to have such an SRAM, or at least a compatible one.

It didn't take much digging to find a 6264, that looked to me like it might fit the bill. A bit of comparison of pinouts (here and here), says that this should in fact be a fine replacement.  You can play spot the SRAM here: 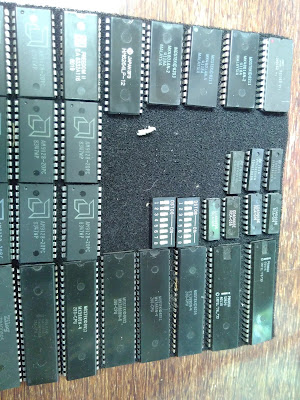 Also, I have the spare 1581 replacement board that Simon Scott kindly sent me.  However, when I tried to use that, the Amiga drive mechanism in it steps back and forth, instead of progressively across the disk.  Something is fishy there.

So, before taking the soldering iron to my 1581 PCB, I tried the mechanism and cable from my 1581 with the PCB he sent me -- and success! It formats and reads a disk fine.  Was it the drive or the cables? That's a fairly easy experiment to run, and it turns out it is the drive mechanism that is the problem.

It thus looks like I can frankenstein the two units to make one good one, and if I am feeling excited, I can de-solder the SRAM on my old PCB, and try to resurrect that, and then hunt a new drive mechanism for that. In fact, I have plenty of PC floppy drive mechanisms laying about -- if I can find the instructions on using one of those with the 1581 PCB.

But for now, I would have to switch the LED leads on the board with the faulty mechanism, so I decided I should just go the whole hog, and resurrect my old board with the spare RAM chip I found. After re-acquanting myself with my aged solder-sucker (which is perhaps only marginally younger than the SRAM I was replacing), I had removed the old IC by chopping it off at its knees (all 28 of them), and then putting a socket in, and then seating the "new" SRAM in place: 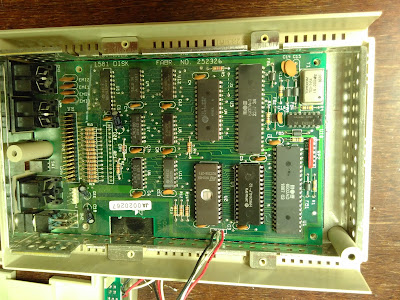 Then, it was very pleasing to discover that the drive works perfectly again, at least so far as I have tested it, which is to format a new 720K disk, and read the directory from it.

So, after all that diversion, I now have disks that I can safely use to test the MEGA65 floppy interface, and when I get to the point of writing data to disk in it, a drive in which I can verify that the written data is readable.

Posted by Paul Gardner-Stephen at 12:27