Just a short post this time, but a very exciting one: The first commercial software title has been announced for the MEGA65!  Hibernated 2 will released on 3.5" disk for the MEGA65: 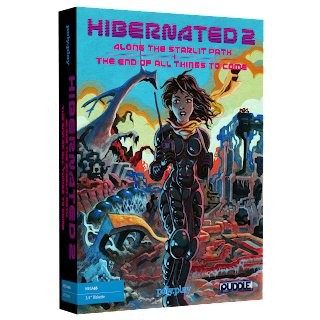 Both the author and Stefan Vogt and PuddleSoft are enthusiastic supporters of the MEGA65, and thus it our great pleasure to be able to announce them as being the first retro-game house adding support for the MEGA65.  Here's a screenshot from when I was helping to get it running: 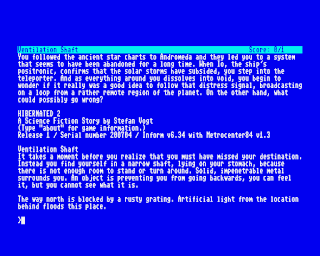 What is particularly exciting about this particular release, is that it uses a Z-Machine text adventure engine, Ozmoo, that I ported for the MEGA65 last week.  This means that it is possible to make MEGA65 versions of a large back-library of text adventure games, all enjoying 80 columns and 40MHz CPU speed.  While the 80 columns makes an obvious contribution, the CPU speed is actually super-helpful here, as the Z-Machine is notorious for running slowly on 6502-based systems.  At 40MHz, though, it feels super responsive.
Just to show how easy it is to use our port of Ozmoo to create versions of existing text adventures, here is a screenshot of The Hitch-Hiker's Guide to the Galaxy: 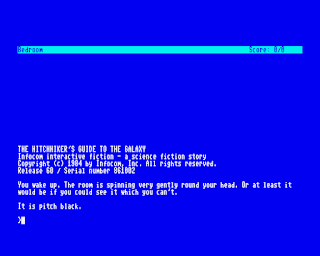 We are hoping that this will be the first of many official software releases for the MEGA65!
Posted by Paul Gardner-Stephen at 15:06